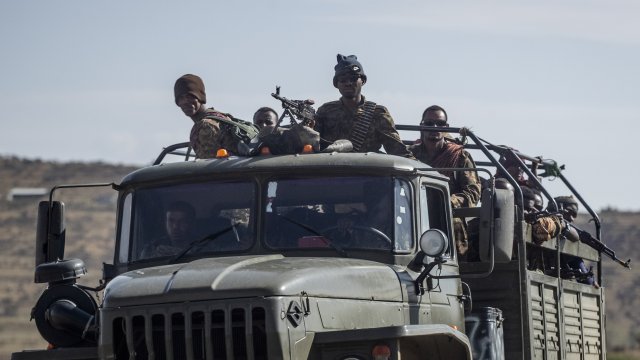 The Ethiopian government has announced it fought back rebels to retake the town of Lalibela, a UNESCO World Heritage Site famous for its medieval churches carved in rock.

After a year of bloody battles, displacement and famine, the country has deteriorated so much that the U.S. embassy is preparing for a potential evacuation.

Before the latest offensive, rebel forces from the northern Tigray region had been moving south, according to open-source conflict monitors, reaching the town of Debre Sina about 120 miles from the capital, Addis Ababa.

A State Department cable, sent Monday and obtained by Newsy, says the White House instructed its top diplomat for the Horn of Africa to get “precautionary assurances” from Ethiopia’s prime minister that his government will allow American diplomats to safely evacuate in the event of a security emergency.

Special Envoy Jeffrey Feltman also sought authorization for U.S. military personnel and aircraft to enter the country to assist in the effort, with Prime Minister Abiy Ahmed granting verbal assurances for both.

This came before a senior State Department official announced there were “no plans” to fly the U.S. military into Ethiopia. A spokesperson told Newsy it can’t comment on the leaked cable.

“Tigrayan rebels… are only about 120 miles or so outside of the capital right now, and so it could just be a matter of days that is required for them to reach the capital,” Cameron Hudson of the National Security Council said. “The likelihood of any scenario where the capital falls and the United States is forced to evacuate its citizens is really hard to ascertain right now.”

Hudson was the director of African Affairs at the National Security Council during the Obama administration. He says officials are desperately trying to avoid a rushed departure that in any way resembles the chaotic evacuation from Kabul, with Americans left behind.

An estimated 30,000 to 40,000 U.S. citizens are in Ethiopia, but experts say the number is likely much higher because of dual citizens and because the State Department didn’t push citizens to register, as the country was stable for so long.

“Washington’s primary concern right now is avoiding the fall of Addis and as part of that, avoiding U.S. personnel being caught in crossfire and being unable to escape,” Hudson said.

The State Department has been advising U.S. citizens since November not to travel to Africa’s second most populous country, and for those already there, to immediately depart on commercial flights …read more

The best online brokerages for investors of all kinds, from kids to pros