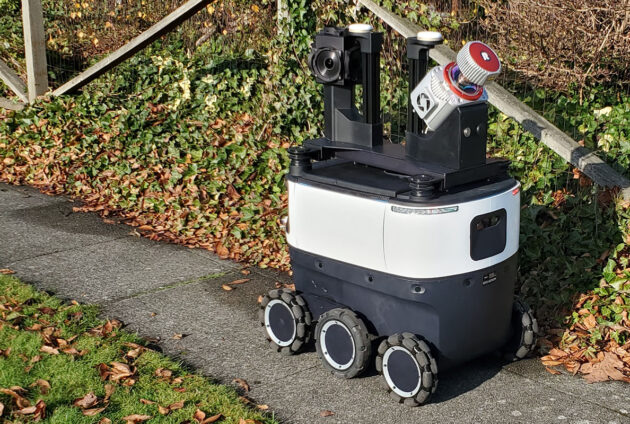 While I was out on an ordinary drive through Everett, Wash., on Saturday morning, in between grabbing a donut for my daughter and a coffee for my wife, I spotted something interesting: An unmarked, six-wheeled robot being driven down the sidewalk on Broadway.

I immediately thought of Scout, Amazon’s package delivery robot that allegedly began testing in 2019 in an unnamed Snohomish County neighborhood, and rolled out Irvine, Calif., Atlanta, and Franklin, Tenn. earlier this year. Ever since the initial announcement, I’ve been keeping a close eye out for the robots, but to date I’ve neither seen them myself nor have I seen any evidence of a real-life sighting on social media.

When the robot turned down a side street in Everett’s Riverside neighborhood, I decided to follow it and stop to get a closer look. However, as I approached, I saw an array of cameras and sensors protruding from the top of the robot.

This was obviously some kind of mapping robot, not a delivery robot. It looked like a miniature version of Google’s Street View cars, and wasn’t running autonomously. There was clearly an operator following closely behind, driving the robot with a wireless Xbox 360 controller.

The operator of the robot followed behind, using an Xbox 360 controller to direct the robot. (GeekWire photo / Tim Ellis)

When I asked the operator about the purpose of the robot and who they were with, they were friendly, but offered only very vague responses. They said they were doing “logistics” and “mapping,” but would not name the company they were working for. When I commented about the Xbox 360 controller they were using to pilot the robot, they held it close to their chest, as if to hide it. Their nearby van had no company markings.

How mimicking asteroid collisions can make diamonds in minutes

This unmarked van was the base of operations for the two operators running the sidewalk mapping robots. (GeekWire photo / Tim Ellis)

All of this intrigue only made me more curious, so I took a closer look at the robot while doing my best to heed the operator’s insistence that I “keep a distance.” This more in-depth inspection revealed something I had missed on my initial take: a small Amazon.com serial number sticker on the back that confirmed my …read more

To understand the web, you need to understand Google Analytics. This training gets it done