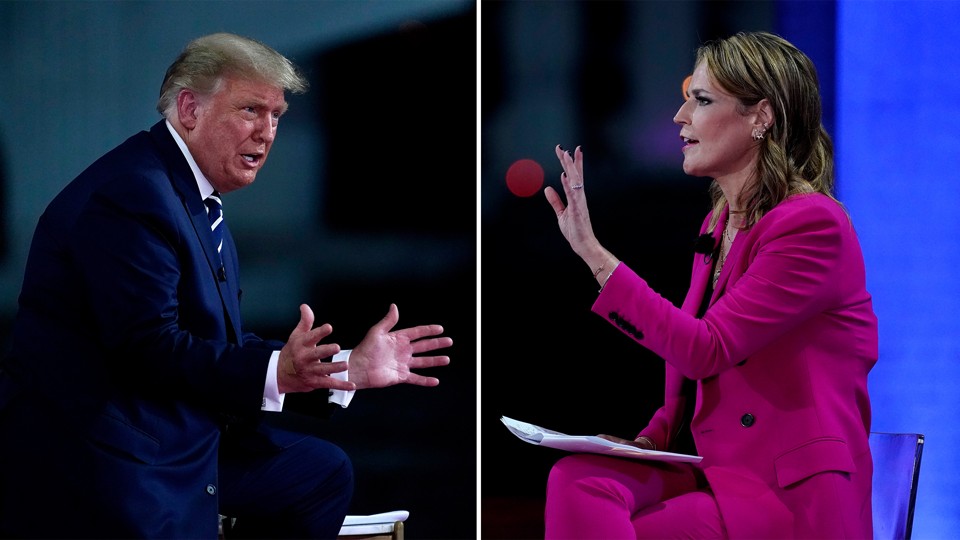 President Donald Trump likes to dabble in conspiracy theories, and he does not like to contradict his base. So it should come as no surprise that the president tonight refused to denounce the warped conspiracy theory movement known as QAnon that posits there’s a global cabal torturing children and exalts Trump as its savior.

Yet if Trump no longer has the power to surprise, he still has the power to shock. He proved that once again tonight when NBC’s Savannah Guthrie confronted him about Q during the network’s town-hall, as Trump first claimed not to know what QAnon was and then voiced sympathy with its supposed central tenet. “What I do hear about it is they are very strongly against pedophilia, and I agree with that,” the president said. “I do agree with that.”

“But they’re not a satanic cult?” Guthrie asked.

“I don’t know that,” Trump replied.

The question—“Can you once and for all denounce QAnon in its entirety?”—had been a lay-up for Trump, an opportunity for him to signal to middle-of-the-road voters that he is not, in fact, crazy, and to the conspiracy theorists of America that they should give up this delusion. It was remarkably similar to the shot Trump had in the first debate to unequivocally condemn white supremacy, which resulted in another infamous air ball. (Pressed on that by Guthrie tonight, Trump quickly denounced white supremacy and then quickly pivoted to railing against antifa.)

[Read: The prophecies of Q]

This was not the first time Trump has praised QAnon, which the FBI has called a domestic terrorism threat. “I heard these are people that love our country,” he said in August. By one count, he has amplified Twitter accounts that promote QAnon more than 200 times. But the question tonight came in front of an enormous audience, and once again, the president could not bring himself to criticize a group, however large or small, that provides him loyal support. It’s not clear how far the QAnon conspiracy has spread in the U.S., but it is spreading deeper into the nation’s halls of power. A number of Republican congressional candidates are followers of QAnon, and one of them, Marjorie Taylor Greene, is virtually assured of winning a seat in the House from Georgia this fall. Hours before Trump’s town hall, Senator Kelly Loeffler of Georgia—who has tied herself closely to the president—enthusiastically accepted Greene’s endorsement in …read more

Racism query tripped up B.C. leaders, but left some questioning the question