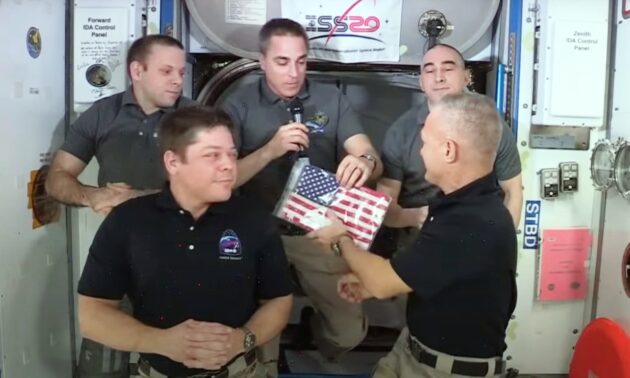 NASA astronaut Chris Cassidy hands a U.S. flag to his crewmate, Doug Hurley, during a farewell ceremony on the International Space Station. The flag flew into space on the first and the last NASA space shuttle mission, and had been set aside on the space station for the first post-shuttle crew to return to the station on a U.S.-built spacecraft. (NASA via YouTube)

NASA and SpaceX are going ahead with plans to bring NASA astronauts Doug Hurley and Bob Behnken home from the International Space Station for a splashdown this weekend, even though Hurricane Isaias is heading for Florida’s Atlantic coast.

Fortunately, SpaceX’s Dragon capsule is heading for waters off Florida’s other coast.

NASA said weather conditions are all systems go for the targeted site in the Gulf of Mexico, close to Pensacola, as well as for an alternate site off the coast of Panama City, Fla. That opened the way for preparations to proceed for the Dragon Endeavour to undock at 7:34 p.m. ET (4:34 p.m. PT) today, with a splashdown set for 2:41 p.m. ET (11:41 a.m. PT) Sunday.

The plan could be adjusted, before or after the docking, if the weather forecast changes. NASA and SpaceX had made plans for seven potential splashdown targets, but due to Isaias’ strength, NASA concentrated on the westernmost sites..

Just as the Dragon’s launch made history in May, its return will go down in space history books as well. It’ll mark the first return of a commercially built and operated U.S. spacecraft from orbit, and the first at-sea return of U.S. astronauts since the topsy-turvy splashdown of NASA’s Apollo-Soyuz crew in 1975.

During a news conference conducted in advance of undocking, Hurley said he had reviewed the Apollo record and acknowledged that splashdowns can be “pretty challenging from a physiological standpoint.”

“Folks didn’t feel well — that’s the way it is with a water landing,” he said. Flight surgeons will be on board the recovery fleet to help the astronauts adjust.

The game plan calls for the Dragon to be hoisted aboard the main recovery ship with a crane, and then for Behnken and Hurley to be extracted from the capsule for the return to shore.

During their 63 days on the space station, Behnken participated in four spacewalks with NASA crewmate Chris Cassidy to …read more

Soundsnap serves the audio needs of creatives and marketers. Get a library of stock audio and sounds for 25% off