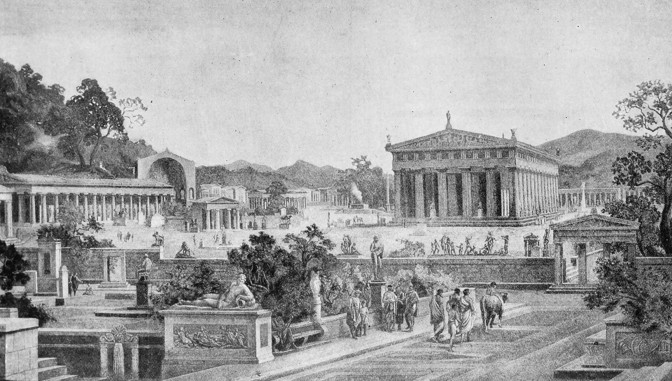 Earlier this month, in the days following the first full moon of the summer solstice, NBA athletes and personnel who were scattered around the world amid the coronavirus pandemic descended on Orlando, Florida, and entered a bubble. It was an act of purification with ripples in time that span nearly 2,800 years.

In another era, Orlando would have been Elis, the Greek city-state that housed the ancient Olympic Games for the first millennium of its existence. Competitors were to reach Elis by the summer’s first full moon, which marked 30 days before the start of the Games. That month was meant to be a grueling stretch, weeding out the competition through a gantlet of brutal physical training; a regimented and uninspiring diet, which weaned athletes off indulgences such as wine and dessert; and the curbing of sexual activity. Preliminary reports from inside the NBA’s Walt Disney World Resort campus have poked fun at the tepid food offerings, while the ESPN personality Stephen A. Smith has pondered the likelihood of players breaking the bubble to address their sexual frustration. Athletic history, it seems, has come full circle.

The NBA has spent upwards of $170 million to create a workplace environment suitable for the chaos of 2020, but the script it’s following is age-old. Susan Brownell, an anthropologist at the University of Missouri at St. Louis whose work often explores the role of sports, told me: “Creating a successful bubble that keeps the infection out, and then holding games that are broadcast across the world, that allow people to vicariously experience a world without the pandemic, I mean, that’s entirely in line with the way sport typically functions in society as a symbolic performance.”

Tayshia Adams: Who Is The New Bachelorette?

[Read: Athletes during the pandemic are learning what fans have always known]

The ancient Olympic Games were held at a sanctuary in honor of Zeus, a common ground that brought feuding city-states together in an athletic truce. It was a liminal space separate from the realities of war, an apolitical competition that, ironically, presented the ultimate political ideal of order and harmony. Such gatherings have created a platform on which society can play out its most pressing “ideological dramas,” as the sports historian Mark Dyreson put it to me. Athletes insulated from reality and the regular …read more

Tekashi69: Terrified of Being Murdered In the Street as House Arrest Sentence Comes to an End?