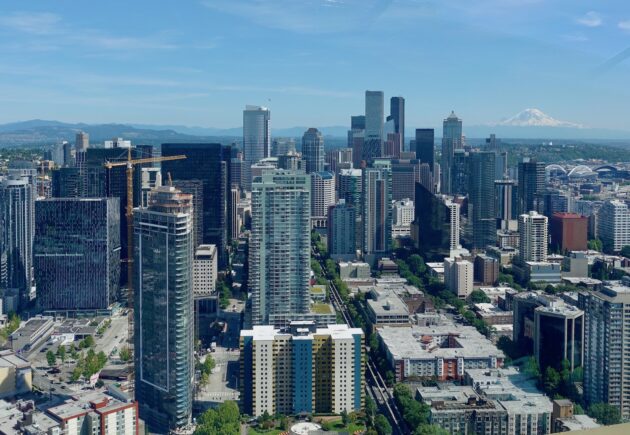 Downtown Seattle and Mount Rainier as viewed from the top observation deck of the Space Needle on Tuesday. (GeekWire Photo / Kurt Schlosser)

The seemingly unstoppable trend of tech companies and talent concentrating in a few cities hit a brick wall in March. As the first-known U.S. cases of the coronavirus emerged in Seattle and the San Francisco Bay Area, tech companies pioneered a nationwide shift to remote work.

Six months into the pandemic, some of those companies will never go back to the office in full force.

Meanwhile, the cities where tech has driven population spikes and surging home prices are confronting sudden budget shortfalls and scrambling to adjust. Seattle and San Francisco — home to the largest and most valuable tech companies in the country — are considering new business and wealth taxes to make up for the lost revenue.

It’s an old story with a new twist: a global experiment in the benefits and shortfalls of remote work. Could the pandemic really lead to a decentralization of tech opportunity from just a few cities? If so, what does it mean for the future of the tech industry in America? City officials and urban experts are watching the trend closely, but they’re divided over the implications.

In addition to infecting nearly 4 million people and killing at least 145,000 people in the US alone, the coronavirus has blown a major hole in the budgets of cities across the country. In Seattle, the shortfall is estimated to be around $400 million this year. San Francisco is scrambling to plug a $1.7 billion budget deficit over the next two years.

Both cities are considering taxes that target big business and wealthy executives to fill their gaps.

The Seattle City Council passed legislation earlier this month that taxes the top salaries at the highest paying companies in the city to fund coronavirus relief programs right away and affordable housing down the line.

In San Francisco, voters will be asked to decide on a number of new taxes this November that affect the tech industry, including a CEO tax on executives earning at least 100 times the median income of their average worker. Another proposal would tax stock-based …read more