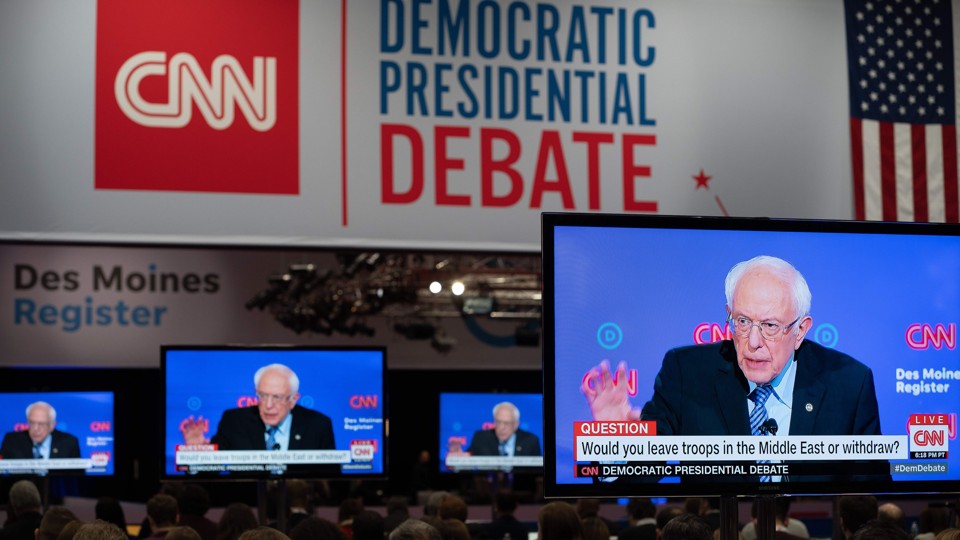 In 2008, Barack Obama won the Democratic presidential nomination arguably based on a single policy position that distinguished him from his chief rival: his opposition to the U.S.-led war in Iraq from its outset. Twelve years later, Senator Bernie Sanders of Vermont has the chance to capture the party’s nomination because of that same stance on that same war.

At tonight’s Democratic debate in Iowa, Sanders had his best chance yet to remind progressive primary voters that on the most consequential foreign-policy decision of the 21st century, he stood alone among the six candidates onstage in clearly opposing the Iraq War.

“I not only voted against that war; I helped lead the effort against that war,” the senator from Vermont said in the opening moments of the debate. Sanders proceeded to tout his efforts to restrain President Donald Trump’s ability to lead the U.S. into another Middle East war with Iran, and he seized an opening to contrast his record on Iraq with former Vice President Joe Biden, who in 2002 voted to give President George W. Bush the authorization he needed to start the conflict.

“I did everything I could to prevent that war. Joe saw it differently,” Sanders said.

That Sanders received such a prime opportunity was thanks in large part to CNN, which devoted the first half hour of tonight’s debate to foreign policy and tossed its first question—Why are you best prepared to be commander in chief?—to the senator. But he can also thank Trump, whose decision to authorize a lethal strike against Iranian military leader Qassem Soleimani thrust foreign policy to the center of the Democratic primary campaign.

Sanders has been competing with Senator Elizabeth Warren of Massachusetts for support among progressives, but here his longer record in Congress has helped: Warren was not even a public figure when the Iraq war started in 2003. The other top-tier Democrat, former South Bend, Indiana, Mayor Pete Buttigieg, served in Afghanistan, but was barely able to legally drink a beer when the U.S. invaded Iraq.

Whether Sanders made the most of his chance tonight is another question.

The other candidates largely held their own during the foreign-policy exchange, and CNN’s Wolf Blitzer did force Sanders to acknowledge that for as sound as his judgment may have been on Iraq, he voiced regret for his vote in support of the war in Afghanistan, which is …read more

The 3 kinds of Republicans that Bolton’s testimony would reveal

The tragedy of Joe Biden